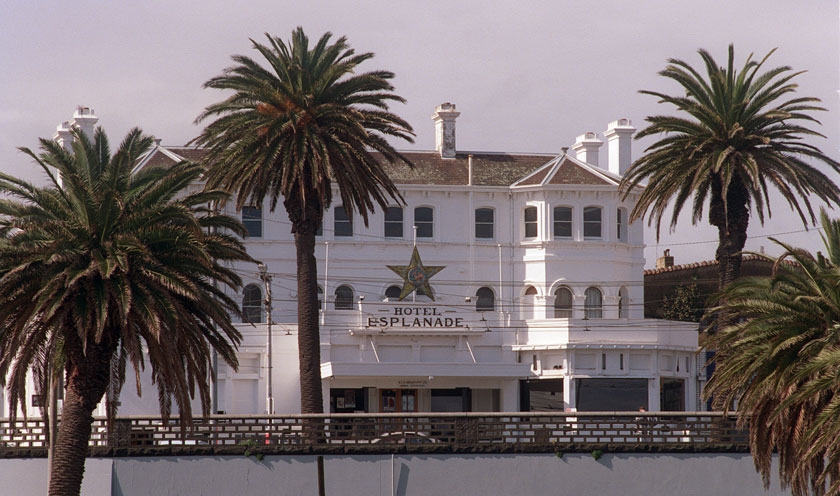 The Esplanade Hotel (The Espy) has graced St Kilda's foreshore promenade since 1878. For over a century its stages have hosted the finest performers from Australia and the world, none more so than in the decades of the 1980s and 1990s. So, when yet another redeveloper bought the site for a tower dream, concerns over the hotel’s future mobilised a determined opposition.

The cultural response in the late 1990s to the proposed redevelopment of the Esplanade Hotel . . .was the biggest and most decisive in St Kilda’s history. The threat to the Espy mobilised thousands of people across the many successive, but co-existent layers that make up the locality. The campaign was about more than property values and historic preservation. For some people, it was more than just the future of St Kilda. The alternative subculture of the hotel became a metaphor for cultural differences in the face of a market-driven planning process that sees in all urban localities only their potential for recapitalisation. (Kate Shaw, Whose Image? Global restructuring and community politics in the inner-city, unpublished Master's Thesis, RMIT University, Melbourne, 1999, page 168)

Set against a political battle of wills between State and local government for control over planning, the campaign to save the Espy took numerous twists and turns. The six-year battle sustained considerable media interest, attracted wide public involvement, and broke submission records. Most importantly, it introduced into the Port Phillip Planning Scheme, for the first time, an amendment to protect the ‘cultural use’ of a place.

The story of the Espy Campaign has been compiled from public records and private collections with the help of Esplanade Alliance members, staff at the city of Port Phillip archives, and financial assistance from Public Record Office Victoria (PROV) Local History Grants Program 2013-2014, under the auspices of the St Kilda Historical Society.

The project was researched, collated, indexed and written by Krystyna Kynst, Esplanade Alliance founding member and the campaign's communication manager.  The archive, which contains 774 items, including press clippings, TV and radio tapes, publicity documents, minutes of Council meetings, correspondence and submissions, was digitised by AMS Imaging in South Melbourne.

However, the biggest thank you has to go to the hundreds of people who propelled the campaign by their enduring commitment to manning street stalls, leafleting letterboxes, putting up posters, signing petitions, writing objections, lobbying politicians, organising fundraisers, donating their musical, artistic and comic talents, preparing submissions, attending Council meetings and VCAT hearings, designing, sewing and selling T-shirts, and more. They saved the Espy.

The story of the campaign, told in the following pages, provides links to selected digitised records.  Kindly note: some video and document links may take a while to load, due to size.

The story is also available as an iBook, free from the iTunes store.

6. Council slays Godzilla: State Government does not call in Council's decision to reject Becton's application 14/12/98 to 22/12/98

9.  Hotel Rescue: Esplanade Hotel Foundation seeks to separate the Espy Hotel from its backyard development potential, bids to buy it  27/11/00 to 20/8/01