Amendment C25 to the Port Phillip Planning Scheme would be a ground-breaking document, for it would, for the first time, recognise cultural use as a valid consideration in the planning guidelines.

Work to prepare the site-specific Amendment C25 began in December 2000, shortly after the publication of the report from the Esplanade Hotel Working Group, when the developer and the community sat with Council to discuss the future of the Espy Hotel site.

In February 2001 Becton wrote to Council, challenging its planning scheme amendment process, arguing instead for an Advisory Committee. An Advisory Committee process would allow Becton to present its own ideas, to be assessed against Council’s amendment proposal. And should the committee decide for Becton’s ideas, contrary to the intent of Council’s amendment, it could simply recommend abandoning that amendment. In effect, the Advisory Committee process would take the decision out of the hands of the Council and the community, and put it into the hands of a State-funded body.

Read the difference between the two approaches to amending planning guidelines.

By 7 May 2001 Council was ready to approve a draft Amendment C25 - which set height controls for the Espy Hotel site, embraced the Espy’s cultural significance, and highlighted the heritage value of Baymor Court - and take it to public exhibition.

But on the morning of the Council’s vote, Becton announced its intention to sell the Espy.

The proposed sale had critical implications for Amendment C25. The separation of the hotel into two leases could threaten the Espy's cultural significance, if the upper levels were used for purposes not supportive of, and incompatible with, the core established hotel use at ground level. There was also the issue of access to adequate loading bays.

Council decided to delay the public exhibition of Amendment C25, while it worked on changes to address the issues raised by the sale, and tested the changes through 3-D modelling to ensure they would achieve the appropriate planning outcomes and the pub’s survival under new lessees.

The revised draft was exhibited fro public comment from 19 July 2001 until 20 August 2001, though submissions were accepted well into September 2001.

Amendment C25 was an innovative and bold attempt to protect, for the first time in a planning scheme, the cultural significance of a local venue. In summary it proposed to: 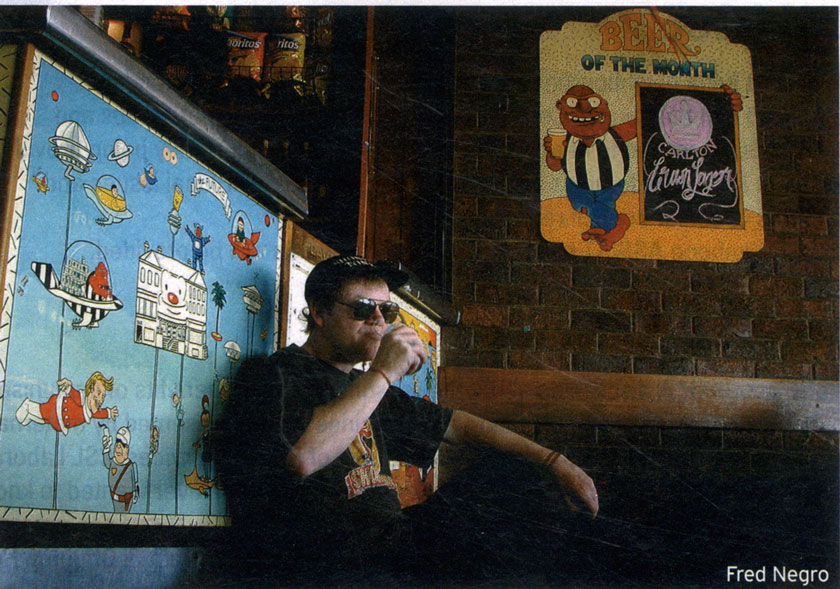 • Introduce several policies/objectives into the Port Phillip Municipal Strategic Statement that primarily related to sustaining the on-going cultural significance of the Esplanade Hotel, including the preparation of a management plan for the hotel.

• Introduce a site specific Design and Development Overlay - DDO12 - for the Esplanade Hotel site that retained the front section of Baymor Court, sets preferred and absolute maximum building heights across the site, and addressed reasonable access, operational and service needs of the Esplanade Hotel such that its cultural significance would not be compromised.

Mayor of Port Phillip, Julian Hill said: “The amendment . . . boosts the cultural significance of the Espy, now including a statement about the Espy as an entertainment venue par excellence from the jazz and big band era to the more recent decades of rock ‘n roll, country music, comedy and ‘non-mainstream’ cultural expression. No matter what gets built towards the rear of the site, it must reinforce the enduring cultural significance of this St Kilda landmark . . . Access, operational and service needs of the hotel will also need to be appropriately addressed. We don’t want the cultural integrity of the Espy compromised.”

Council received eight submissions, including one each from Becton Corporation, the Esplanade Alliance and the National Trust. In response, Council made some changes to the amendment and, on 1 October 2001 voted to request that the Minister for Planning appoint a Panel to consider Amendment C25, all submissions and Council’s endorsed changes.

Read a summary of the matters raised in each submission and officer recommendations and the various (albeit minor) changes to the exhibited version of Amendment C25.

For a comprehensive insight into the developer’s thinking versus that of the community, read Becton’s full submission and Esplanade Alliance full submission.

Becton was not happy with the direction the process had taken. It insisted in letters to Council of 24 October 2001 and 4 December 2001, and at the Panel directional hearing on 12 December 2001, that it be allowed to submit a building design to the hearing that would demonstrate, concretely, its proposed changes to Amendment C25, “to assist the Panel in better understanding our submission on the ultimate form and content of the Amendment”.

The Panel agreed to delay its hearing, scheduled for early 2002, to give Becton time to supply detailed plans for its proposed building, including an outline of how its design would differ from Council’s draft Amendment C25. Council, at its 17 December 2001 meeting, reiterated its continued support for draft Amendment C25.

Thus, another battle between the community and the corporate developer was to be fought in a public forum.

to Amendment C25 pushed design envelopes to the limit, showing ten storeys across the whole site. Becton sought to delete from Amendment C25 the design objectives and provisions outlining the cultural significance of the Espy and to drop all references to Baymor Court.

Once again, Esplanade Alliance rallied the community to respond to Becton’s proposal. It argued Becton was challenging the values and principles determined by the Esplanade Hotel Working Group process and going to great lengths to undermine Council efforts. It urged people to make a submission.

By the time Council met on 2 May 2002 to consider Becton’s design and proposed changes to Amendment C25, it had received 41 submissions.

Read the summary of these submissions and a review of the differences and similarities between Council’s and Becton’s approach to Amendment C25, in the agenda attachments to Council meeting, 2 May 2002.

It was at this 2 May 2002 meeting that the first cracks appeared in the thus far united position of Council and Esplanade Alliance. Council voted to abandon its preferred maximum height of eight storeys in favour of the absolute maximum height of ten storeys reflected in Becton’s design, on the proviso that the strategic intent of Amendment C25 was maintained, in particular the retention of local policies that highlighted the cultural significance of the Espy. Two Councillors moved that it also address reasonable access, operational and service needs of the Esplanade Hotel.

In making this concession, Council argued it was far better than the original 38-storey proposal Becton had brought to the table four years earlier.

Esplanade Alliance did not agree. It argued that the height limits of six storeys had applied to the site when Becton bought it. These had since been raised to eight storeys. By allowing ten storeys, it feared more concessions would be made to the developer as the debate moved to the Panel Hearing, scheduled for 13-22 May 2002.

The City of Port Phillip’s submission was prepared by Best Hooper solicitors’ senior counsel I McP Pitt. Its urban design evidence came from Robert McGauran, director McGauran Soon Pty Ltd, Architects, Urban Planners and Interior Designers, as did the comparison of Council’s preferred height limits with the absolute height limits proposed by Becton. Council’s statement of evidence on planning issues was prepared by Matrix Planning Australia. Robert Foster Architect prepared, jointly for Becton and the City of Port Phillip, an analysis of overshadowing impacts. The Esplanade Alliance wrote its own submission.

The Panel received 65 submissions and undertook public hearings for five days. The Panel’s report for the site-specific Amendment C25 (the Espy) was received by Council on 21 June 2002 and publicly released on 9 July 2002. The Panel agreed with ten storeys over a larger section of the site than had been proposed by Council; it doubted whether Baymor could be successfully incorporated into a new development; and, whilst supporting the inclusion of a statement about the Espy’s historic, cultural and social significance, it did not give the same weight as Council to the Espy’s cultural significance as a live music and comedy venue.

Council was not bound to accept the Panel’s recommendations. On 22 July 2002, it voted to disagree with those recommendations that did not support the strategic intent of Amendment C25. Thus, Council ensured the final planning controls would recognise and support the Espy’s role as cultural incubator and would require Becton to address reasonable access, operational and service needs of the Esplanade Hotel when designing a new residential development for the site, "such that the cultural significance of the hotel is not compromised".

Council also sought to ensure the urban contribution of Baymor Court; but had to acknowledge that heritage issues could be addressed only when Becton submitted a specific design proposal.

In August 2002, Council adopted Amendment C25 and resolved to forward it to the Planning Minister for approval and inclusion in the Port Phillip Planning Scheme.

Concerns remained, not least from the new hotel lessees, about services access to the hotel from the development site. Their concerns were raised with Council, which pointed to key clauses in the planning scheme - MSS and DDO12 - that had been devised to protect cultural significance. Council was confident the clauses would hold.

However, this was not to be. Access to loading bays would become the developer’s key bargaining tool as the campaign reached its zenith.