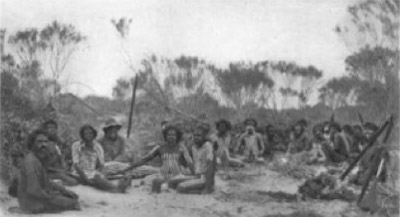 Before the arrival of Europeans In 1835, the City of Port Phillip area was occupied by the Yalukit Willam clan which was one of the six clans of the Boon Wurrong people. The area the Boon Wurrong inhabited stretched along the coast from the Yarra River to the north to Wilson’s Promontory in the south.

The area occupied by the Yalukit Willam was generally low lying. For example the area now described as the Albert Park Lake Reserve was once a rich willam or camp for the Yalukit Willam and their guests from the country. The remaining obvious evidence of our aboriginal inheritance is the Ngargee or Corroboree Tree located precariously alongside Queens Road and the newly renovated Cricket Ground near Fitzroy Street. This magnificent trees dominates the surrounding area despite its age and loss of limbs, It bears testimony to the longstanding aboriginal use of this area. 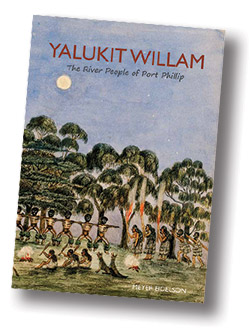 Meyer Eidelson’s book on the Yalukit Willan gives a compelling vision of the original geography of this area:

Rising from the wetlands were prominences such as today’s point Ormond Hill, the Esplanade Bluff, the Silurian ridge of St Kilda Hill , and the ancient volcanic core of Emerald Hill. These provided higher and dryer locations for Willam or camp places for ceremonies, tool manufacture, ochre collection and lookouts.

Historical records show that even these landmarks were significantly altered with the arrival of the Europeans in 1835 as both Point Ormond and the Esplanade Bluff were used for various purposes including road building to the north and filling in swamps such as Elsternwick Park, to the south.

The eventual exclusion and decline of the aboriginal presence in the St Kilda area is documented in Meyer’s book which is under publications on this website or via this link from the CoPP Website. https://heritage.portphillip.vic.gov.au/Aboriginal_heritage/Yalukit_Willam_The_River_ _of_Port_Phillip

Books in our collection can provide additional information about the relationship between the aboriginal people and the Europeans in the early period of colonization, especially the Cooper Volume 1 History of St Kilda can also be readily accessed under Publications.